Giving Back To The Community With Prime Minister Malcolm Turnbull

Everyday we are confronted with the many problems faced not only within our selves but across our communities. It’s easy to feel like there’s little we can do to help however, we have robust evidence that shows that each individuals can have a significant impact on improving the lives of others when connected with other like minded people who are trying to do the same thing.

There are many ways in which we can have a large impact through our donations whether at a monetary value or the intrinsic value of giving up our time, and the ‘ Our Big Kitchen‘ (OBK) team gives an incredible platform for people from all walks of life, even with prior convictions, to change their lives around and support others that are going through their struggles of life’s basic necessity – food.

At Tech Patrol we feel compelled by the pure need of give back to our communities so we can all thrive and live a more enriched life. That’s why we operate the IT resources of OBK and support their amazing efforts of food distribution to the people who really need it! 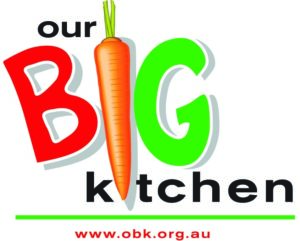 Our Big Kitchen (OBK) is a community run, non-denominational, industrial kitchen where meals are prepared for distribution to needy people across Sydney. OBK is Kosher and Halal certified, and HACCP approved. At OBK we offer a place for people to come together and cook for a good cause.

MISSION: OBK nourishes, educates, empowers and supports people in need and always with love. Last year OBK distributed over 80 000 meals to disadvantaged Australians, OBK does this through meaningful volunteering experiences.

PHILOSOPHY: OBK believes in the power of giving. Through giving you receive. We offer a safe, non-judgemental environment where people from all walks of life can connect through doing good. Food and giving meals is the positive end result but the journey of how the meal was made is just as important.

OBK does this through food rescue, working closely with organisations like SecondBite and Foodbank to minimise food waste and turn fresh produce into a home cooked meal. OBK does need to also buy in ingredients, as fruit and veg is the main ingredient we rescue. 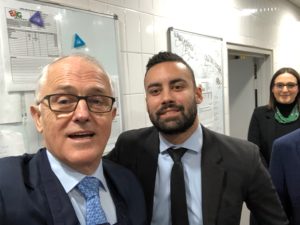 It’s easy to be a company that sits back and donates money or it’s services but it’s another thing when individuals of that company likes to get involved!

Today was a special day as not only did our Tech Patrol team get involved in supporting this great cause once again, but we also had the pleasure of having Australia’s current sitting Prime Minister, Malcolm Turnbull on board helping the cause.

Not only did Malcolm take a great selfie with our Head of Sales & Marketing, Diogo Correa. but he also helped the kitchen prep the food to be cooked and handed out to all the shelters across NSW that are in need of what we can sometimes take for granted.

Malcolm Turnbull is not the only Prime Minister to visit the kitchen that is supported by Tech Patrol. Many public servants have participated in its programs over the year, including former prime minister Kevin Rudd, Dame Marie Bashir, former governor-general Dame Quentin Bryce.

“This is phenomenal. This is what it is all about. When we are loving and generous, this is when we are closest to God. The love you share here is very important.” – Prime Minister, Malcolm Turnbull. 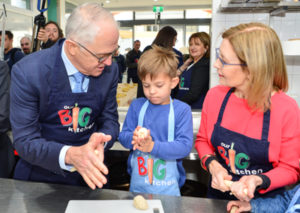 Prime Minister Turnbull brought his 4-yr-old grandson Jack to try his hand at baking challah. Jack, like the dough, rose to the occasion and whilst Jack learned about baking and cooking, his grandfather was taken on a tour by benefactor Harry Triguboff, his granddaughters Orna Triguboff and Ella Lizor, as well as Rabbi Dovid Slavin who without him none of this is possible. 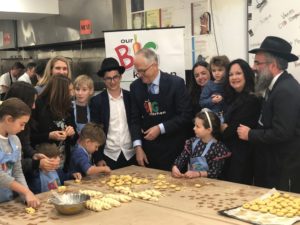 Joined by local state MP Gabrielle Upton, Jack and his grandfather quickly learned the rudiments of challah making from Rebbetzin Laya Slavin and then, without a pause, moving to the preparation of the vegetables to go into some delicious soup.

Rabbi Dovid Slavin said that the prime minister, in whose electorate The Harry Triguboff Centre is located, had been a visitor many times, but now for the first time as prime minister.

“Cooking together has such a powerful chemistry, and that feeling is something you just want to bottle and mass produce.” – Rabbi, Dovid Slavin.

Later, prime minister Malcolm Turnbull made the public announcement of the new grant. The prime minister presented a $48,000 grant to improve security arrangements for the Harry Triguboff Centre in Flood Street which currently is under renovation. The center is home to the Sydney Yeshiva, the Yeshiva school and Our Big Kitchen, the great large commercial kitchen supported by Tech Patrol which prepares food for shelters across NSW and the Jewish community. There was 150 people busy preparing food to be distributed to the needy.

The abbi also presented an OBK apron to Malcolm’s grandson Jack with another for his sister. The four-yr-old chipped in: “But my mum can use it.” Rabbi Slavin presented Malcolm Turnbull a book on the Lubavitcher Rebbe saying: “The Rebbe is the  inspiration for all we do in OBK and the Yeshiva.”

Full video of the Prime Ministers Speech can be exclusively found below: